I told you there'd be great prizes coming up! Our sponsor is a member of my writing group American Night Writers Association (ANWA), Anna del C. Dye. She is kindly giving away a copy of her ebook "Curse of the Elfs." 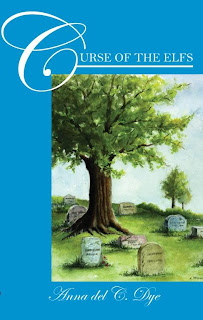 When an Immortal race ceases to be immortal, woe to the land.
Ancient legend tells of elfs crossing paths with a dying wizard named Zoltan. The Old Sorcerer’s unrepentant deeds had caused the wizarding school to chastise him severely. On his deathbed Zoltan asked the elfs for help.  Losing patience in his delirium, he cursed them. Now, the immortal elfin race is slowly, but surely dying.
Their only hope lies in a servant of kings who must learn to love the elfs before he will attempt to save them. But no one, elf or mankind, has ever heard of this man. Can the healer be found before their race is gone forever?


Anna del C. Dye was born in Valparaiso, Chile, amongst some of the world’s most famous beaches.
After meeting Rodney, a native of Idaho, in her hometown, Anna traveled to Utah on Christmas Eve and married him two weeks later. Their love story, Why Him? was published by Covenant in the book entitled Angels Round About. Anna and Rodney reside in Taylorsville, Utah and are the parents of three princes and a princess.
Anna is an accomplished, multi-award winning author. One of her short stories entitled Amerine—Fairy Princess won an award in the Oquirrh Writers contest. The first book in her new YA Romance Series entitled “A Kingdom By The Sea” also won an award. Anna’s works also include The Silent Warrior Trilogy, the beginning saga of her YA Elf Series.
For more information contact Anna at www.annadelc.com.
Posted by Ranee` at 12:33 PM